On Sunday, Indians across the globe were left shocked by the news of the sudden and untimely demise of veteran actor and icon, Sridevi. The actor suffered a massive cardiac arrest while in Dubai to attend a wedding along with her husband Boney Kapoor and daughter Khushi. She was 54.
A talent powerhouse, the actor enthralled audiences across India and came to be known as one of India’s first female superstars. Throughout her career, Sridevi managed to dazzle the screen with her presence in all the different language films that she made. Her portrayals in films like Moondru Mudichu, 16 Vayadhinile, Moondram Pirai, Mr India, Chaalbaaz and so on were proof of her power-packed performance and charisma.
Post-marriage Sridevi took a hiatus from acting in 1997 and made a few rare appearances on television before making an official comeback in 2012 with English Vinglish . She, however, appeared in a television show called Malini Iyer that aired in 2004.
Perhaps her most memorable TV appearance was as a surprise guest on an episode of the TV show Satyamev Jayate in 2012. The episode featured Harish Iyer, prominent LGBTQ activist, who shared horrifying details of the sexual abuse he faced as a child. Harish also shared that actor Sridevi’s films helped him overcome the trauma he faced as a kid.
Aamir Khan, the show’s host, invited Sridevi on stage so a visibly surprised Harish could tell her in person what her films meant to him. Speaking on the show, Sridevi said, “Harish, the mental trauma you have suffered till the age of 18 – I can’t even imagine that someone would do something like this to a child. You have shown the courage of sharing your past with us all. It will give courage to so many children who are going through this hell right now. That makes you a real hero.”
Overwhelmed at meeting his dream icon in person, Harish said, “I just have to tell you that since childhood, away from the abuse I was facing, I had built this fantasy world and it was always Sridevi, always Main Teri Dushman [song from her movie Nagina]. Maybe that’s why we call it cinema… ‘see new maa’, it’s a different kind of mother.”
Applauding Harish’s courage and determination, Sridevi also went on to sign a letter addressed to Parliament calling for stronger laws against child sexual abuse. Later in the show, the star was also seen comforting a tearful Harish. 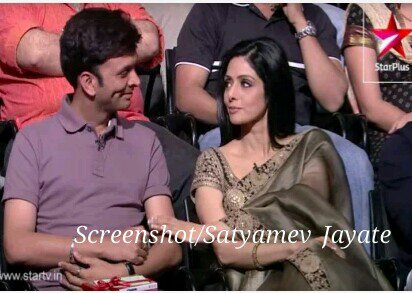 On the star’s birthday on 23 August last year, Harish had written an open letter to her titled “Sridevi, I Am Living Because of You…” in which he said that her choice of roles and the strong depiction of characters had a huge role in encouraging him to live.