By OBA I DONATUS, CNN 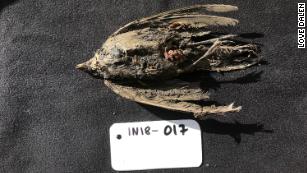 The 46,000-year-old specimen was identified as a horned lark.

(CNN)Scientists studying the remarkably well-preserved remains of an Ice Age bird have identified the specimen as a horned lark.Buried and frozen in permafrost near the village of Belaya Gora in north-eastern Siberia, the bird was discovered by local fossil ivory hunters, who passed it on to a team of experts, including Nicolas Dussex and Love Dalén from the Swedish Museum of Natural History, for testing.Radiocarbon dating revealed the bird lived around 46,000 years ago, and genetic analysis identified it as a horned lark (Eremophila alpestris), according to a paper published Friday in the journal Communications Biology.Dalén told CNN that research showed the bird may be an ancestor to two subspecies of lark alive today, one in northern Russia and the other on the Mongolian steppe.”This finding implies that the climatic changes that took place at the end of the last Ice Age led to formation of new subspecies,” he said. 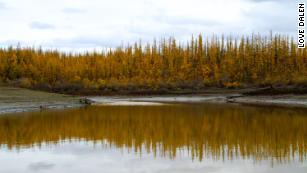 The bird was found in north-eastern Siberia at a site which also contained other frozen specimens.The preservation of the bird is explained in large part by the cold of the permafrost, explained Dussex, but this specimen is in extraordinarily good condition.”The fact that such a small and fragile specimen was near intact also suggests that dirt/mud must have been deposited gradually, or at least that the ground was relatively stable so that the bird’s carcass was preserved in a state very close to its time of death,” said Dussex.The next stage of research involves sequencing the bird’s entire genome, said Dalén, which will reveal more about its relationship to present day subspecies and estimate the rate of evolutionary change in larks.

Is it a dog or is it a wolf? 18,000-year-old frozen puppy leaves scientists baffledScientists working in the area have also found carcasses and body parts from other animals such as wolves, mammoths and wooly rhinos.Dussex described such findings as “priceless” as they allow researchers to retrieve DNA and sometimes RNA, a nucleic acid present in all living cells.”This in turn will open new opportunities to study the evolution of ice age fauna and understand their responses to climate change over the past 50-10 thousands of years ago,” added Dussex.The horned lark was discovered at the same site as an 18,000-year-old frozen puppy, which Dalén and Dussex are also studying.Using carbon dating on the creature’s rib bone, experts were able to confirm that the specimen had been frozen for around 18,000 years, but extensive DNA tests have so far been unable to show whether the animal was a dog or a wolf.Scientists can normally tell the difference relatively easy, and researchers hope that further tests on the remains will provide more insight into exactly when dogs were domesticated.